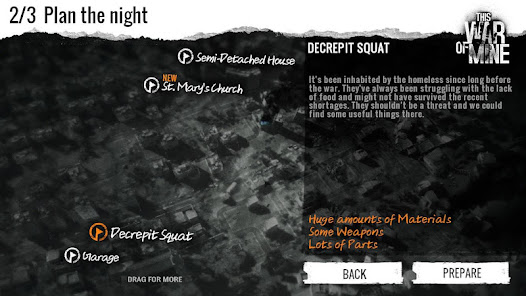 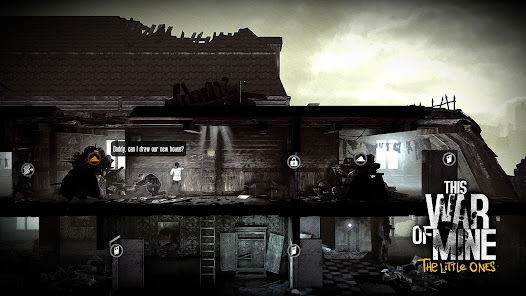 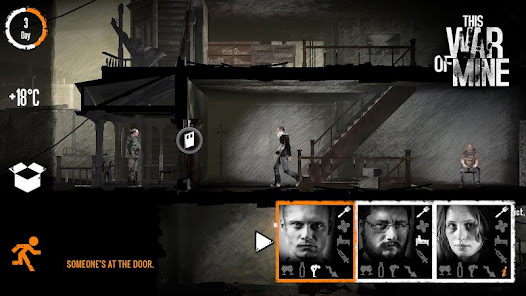 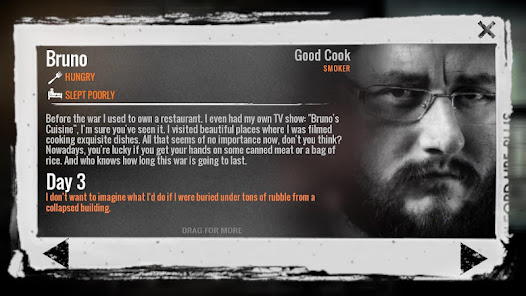 The Little Ones expansion is available now as an in-app purchase!

"If you've not already played this brilliant, heart-wrenching game, then mobile is as good a place as any to let it completely destroy you." – , 9/10, Pocket Gamer UK

In This War Of Mine you do not play as an elite soldier, rather a group of civilians trying to survive in a besieged city; struggling with lack of food, medicine and constant danger from snipers and hostile scavengers. The game provides an experience of war seen from an entirely new angle.

The pace of This War of Mine is imposed by the day and night cycle. During the day snipers outside stop you from leaving your refuge, so you need to focus on maintaining your hideout: crafting, trading and taking care of your survivors. At night, take one of your civilians on a mission to scavenge through a set of unique locations for items that will help you stay alive.

Make life-and-death decisions driven by your conscience. Try to protect everybody from your shelter or sacrifice some of them for longer-term survival. During war, there are no good or bad decisions; there is only survival. The sooner you realize that, the better.

Key Features:
• Inspired by real-life events
• Control your survivors and manage your shelter
• Craft weapons, alcohol, beds or stoves – anything that helps you survive
• Make decisions – an often unforgiving and emotionally difficult experience
• Randomized world and characters every time you start a new game
• Charcoal-stylized aesthetics to complement the game's theme

The newly delivered expansion explores the hardships of wartime survival as seen from an entirely new perspective―that of a child. This DLC puts you in charge of a group of adults and children stuck in a besieged city, struggling with basic necessities. TWoM: The Little Ones focuses not only on the reality of enduring war, but also on how even in times of conflict, kids are still kids: they laugh, cry, play, and see the world differently. In addition to thinking about survival, you'll have to summon your inner child to understand how to protect the little ones. Their youth, and their future, are in your hands.

• Experience the biggest expansion to This War of Mine
• Protect innocent children
• Craft toys, play with kids, and be the caretaker they need
• Meet new adult civilians in scenarios with children

System requirements:
GPU: Adreno 320 and higher, Tegra 3 and higher, PowerVR SGX 544 and higher.
RAM: At least 1 GB RAM is required.
Other devices may work depending on screen resolution and amount of background apps running.

BUTTON CHỈ HIỆN MẬT KHẨU KHI TÌM TỪ KHÓA "This War of Mine mod 5play.tokyo" TRÊN GOOGLE
This War of Mine MOD APK (Unlocked All) is a survival game from 11 bit studios publisher. This is a game that was released in 2014 on the PC and has attracted considerable attention from the gaming community.

About This War of Mine

So far, this game has been developed on the Android platform to reach more people. Although the game takes place in the war, this time you do not play like a soldier but instead is a civilian.

All of these games have a common feature that simulates a devastating war. The game will show you how fierce the war has affected innocent people. They must suffer the consequences of unwarranted war taking place on their own homeland. Through this game, you will be given the opportunity to experience life in extreme circumstances and without any help. Find a way to survive by your own ability if not, the death will find you.

Unlike other war games, This War of Mine has a completely different plot. The story takes place in the form recorded by reporters interviewing people who spent more than 1400 days in the raid campaign on Sarajevo, the 90s Yugoslav civil war. Building your own story, everything depends on your actions. The game development team has confirmed that the game has no plot. They just created context, everything in the game is created by the player.

Your mission is helping your team survive in that harsh situation. All details in the game are rooted in your actions, not following a storyline like other games. You will have to survive for a certain amount of time in the game. Writing a memoir is a very unique feature. For example, in your group, there is a person who is seriously injured and does not have enough bandages, antibiotics, … then a few days later the survivors will write a rewrite of what happened.

In the harsh survival situation of This War of Mine, you must collect items such as food, medicine and other materials scattered throughout the city. These materials are helpful in making production tools or necessities of refugees.

Of course. During the war, food, medicine were extremely scarce, so you had to calculate and use it appropriately if you want to survive. Besides the scarcity of necessities, you must pay attention and watch out for the attacks of other refugees. Search for necessities in a desolate city, rob people of others, or even steal from the army. Many ways for you to get food and water. Not only that, but the weather factor also significantly affects the lives of the group members.

This War of Mine has hand-drawn graphics that make a big impression. The strength of this design is to make the scene more realistic and closer than ever. Besides, the main color tone is black and white, which contrasts with the gloom and brutality of a dilapidated world, engulfed in chaos. After the war, meaningless bombs made innocent people suffer all consequences. Nothing but the ashes, the black smoke, …

The world in the game is reproduced very successfully when the player has an overview, a clear view of where the war swept through. From a peaceful city that has now become ruined, tall buildings have suffered a lot of bullets, dead bodies lying on the street, … like this is a dead city without a little sign of life.

MOD APK version of This War of Mine

Download This War of Mine MOD APK for Android

This War of Mine is an excellent game rated 9/10 on Pocket gamer UK. This game is not “funny”, but it is worth playing. War left nothing but blood and tears. This game helps you experience the lives of people in the context of war, through which you can understand more about human suffering and pain.

The game has some configuration requirements that the minimum RAM must be 1 GB and the GPU can be Adreno 320, Tegra 3 or PowerVR SGX 544. You can download this game by purchasing the game on the Google Play or you can experience the game completely for free through the link below the article.


Search keyword: This War of Mine