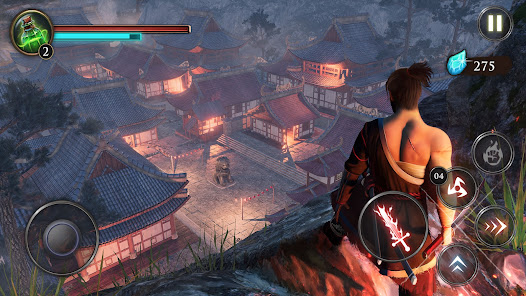 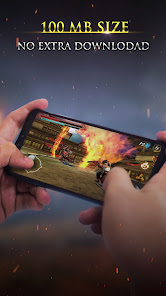 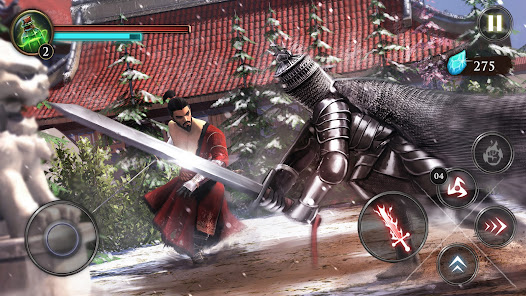 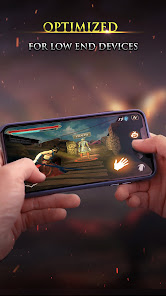 The context of Takashi Ninja Warrior takes place in the medieval period, a dark period of Japan when surrounded by the power of the dark forces. The beginning of this disaster began in the town of Tochi, where the demon lord rose. Arashi – the ultimate ninja of this land fought to protect the people here. But to save the life of the dying son in the hands of the enemy, he sacrificed.

Many years later Karashi grew up. He begged the gods for strength with the desire to follow his father and restore peace here.

In fact, Tochi is a vast territory, not just a town. It has many lands and you will have to go through it all in turn to defeat the enemy. However, they are not available from the beginning, but you need to take turns completing the challenges of each land to unlock the next lands.

We will be back at the beginning. This game plays a short video summarizing the plot, then give you a katana and instructions for basic usage.

Every time you approach the enemy, you can make a hit on the back to eliminate him. In the unlikely event, a confrontation will take place. You click the sword icon to make slashes, touch the arrow-shaped icons to fly up or dodge. When Shuriken is unlocked, you can use them to create an attack combo. The darts is very convenient, because of its high speed and great damage.

Next to health indicators (HP) is the Stamina bar. It represents the mana of the character. When he takes any action, it will be reduced. If it reaches zero, he cannot use the skill anymore. And this is one of the weaknesses of the character when only able to create attack combos in a short time.

The maps in Takashi Ninja Warrior are very large. If every time you, unfortunately, were defeated by the enemy and had to play from the beginning, that would be bad.

Remember the statue from the introductory video? Definitely remember, because you will often encounter it during the process of exploring and finding enemies. Those are the checkpoints. You need to save data to revive at the nearest checkpoint. If not, it will take a lot of effort and time to overcome a challenge.

The doors are sealed

Areas in a map are separated from each other through a door made of wood, sometimes stone or iron. But you cannot use your power or sword to destroy it, because they have been sealed.

Then, you need to find the unlocking mechanism for them. Maybe find a key, or fight the guardians.

The guard is usually quite strong and has more health (HP) than the monsters you have ever met. You will have to spend some time fighting with him, although he attacks very slowly, the energy is concentrated so he can kill you with three moves. So, be careful. When your Stamina is run out, hide behind a rock, a house, or move behind him.

Takashi Ninja Warrior is an action game with both role-playing elements. Therefore, it is also has a system of equipment and upgrades. When the character level up, he is rewarded with skill points. You can use it to upgrade your HP, attack, defense, speed or Stamina.

If you find that levelling up is quite difficult and offers little upgrade points, visit the store to equip yourself with the most powerful weapons. The swords do not require you to meet anything, just pay to get Twins Blade with 84 points of damage. As for Shuriken, Potion and Ability only unlock when you reach the required level.

The conditions for obtaining them are quite hard, but in return, they bring very strong skills and fighting ability. Instead of slashing each enemy with the sword at close range, you can attack them from afar or create sharp ice to damage a large area with Skill Frost Claws.

In addition, there are quite unique costumes for you to dress Takashi for a bolder look. Personally, I like Tochi’s Demon with the Ninja outfit and the demon lord’s horns – the enemy you need to face after all in this game.

Unlimited Money: You have a lot of money when using the MOD version.

If you are looking for an action role-playing game with a thrilling storyline and interesting gameplay, I would like to recommend to you Takashi Ninja Warrior. With the MOD version we provide, you will feel even more excited!