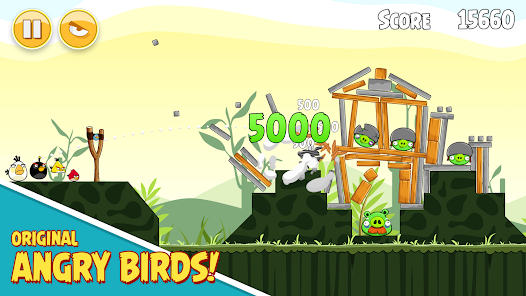 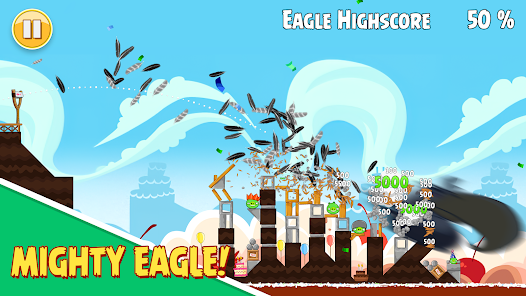 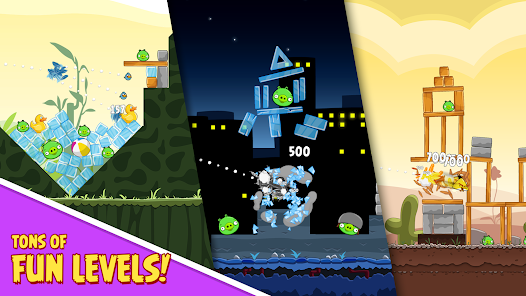 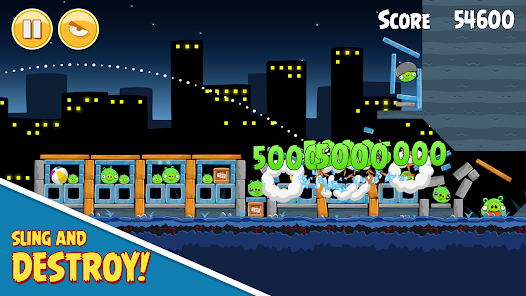 Rebuilt from the ground up, Rovio Classics: AB is a faithful re-make of the original game that took the world by storm!

The survival of the birds is at stake. Dish out revenge on the greedy pigs who stole their eggs. Use the unique powers of each bird to destroy the pigs' defenses. The game features challenging physics-based gameplay and hours of replay value. Each level requires logic, skill and force to solve!

⭐️ Enjoy fun and satisfying slingshot gameplay!
⭐️ Play all 8 original AB episodes from 2012 – over 390 levels!
⭐️ 3-star all the levels and hunt for the Golden Eggs!
⭐️ All the original classic characters just as you remember them!
⭐️ Call in the Mighty Eagle to destroy those hard to beat levels!
⭐️ No IAPs!
⭐️ No intrusive pop-up ads interrupting gameplay!

Relive your first smartphone gaming experience with THE mobile game of mobile games.

We may update the game periodically, for example to add new features or content or to fix bugs or other technical issues. Please note that the game may not function properly if you do not have the newest version installed. If you have not installed the latest update, Rovio will not be responsible for the game failing to function as expected.
——–
Terms of Use: http://www.rovio.com/eula
Privacy Policy: http://www.rovio.com/privacy

A quality remake of Angry Birds!

If you used to be mad but couldn’t leave the Angry Birds game in the past, you will want to relive the once-joyful inhibitions of this legendary game in a refreshed version called Rovio Classics: Angry Birds.

Those who have played are probably no strangers to the context of the logic game screens of the Angry Birds series. This refresh will also begin when the greedy wild pigs steal a series of eggs from the birds. This unscrupulous robbery has made the birds angry. Then they are determined to take revenge and get their eggs back.

How many challenges are there?

This quality remake gives players 8 episodes with more than 390 levels. All the characters come out of the original game with newer looks, smoother movements, and even more attractive physics simulation than before.

The only villain is the greedy ugly pigs. These pigs are also very good at hiding. They built a series of strong fortresses to hide after their campaigns of theft in the forest. Will these fortresses deter the angry birds’ revenge?

Each bird has its own skill and fighting power. Using your inherent strength and logical judgment skills, you will in turn destroy all the defenses of the pigs.

Your task is to turn yourself into a giant bullet, then throw yourself on giant slingshots, align and launch yourself to pinch and destroy a series of strong fortress systems of the pigs.

On the touch screen, the control mechanism of the game becomes even more captivating than before. In addition to aligning the “bullet path”, appropriately calculating the speed and the falling position, and choosing the right type of bullet, in this remake, the birds are not simply bullets but also have many other functions. Especially, in stressful situations, you can also call Mighty Eagle to support you.

In each level, you will be provided with a certain number and type of birds, along with a corresponding cannon model. Deep in the fortress are the cowardly green pigs hiding. Your task is to use a large slingshot, in turn, insert “bird bullets” into the sling, calculate and measure the size and distance, and then shoot bullets to destroy the pigs’ works. Try hard so that each attack can destroy as many large pieces of the fortress as possible. If you successfully destroy the entire system, and kill all the pigs inside without using all or with enough bird bullets, you win and move to a new scene, and vice versa.

Each time you win, you will get a large number of points. The remaining bird bullets will also be counted as bonus points. Reaching a certain point, you will unlock new bird bullets with greater strength and destruction.

The levels are not always linear from easy to difficult. But they are interspersed, there will be screens like “give-free” so that players have the opportunity to accumulate points quickly and soon unlock more species of birds.

The interface of Rovio Classics: Angry Birds has also been upgraded, giving players a more comprehensive view when playing. Although it is only 2D with a direct view, the camera automatically adjusts the distance depending on the situation to help you sometimes observe the whole scene to determine the height and width of the slingshot compared to the pig fortress. Sometimes it zooms in on the birds and the fortress system for you to see the whole process of destruction. This ability is also a factor that creates so much joy.

The physics simulation in Rovio Classics: Angry Birds is also rated better than the original version. The impact and the chain effect when different objects in the system fall down and crumble are sometimes quick, sometimes slow depending on the variation of impact force and weight of the object itself. Everything is reasonable, creating a pleasant and completely satisfying feeling.