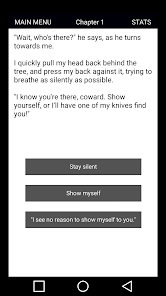 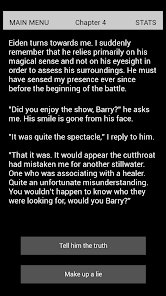 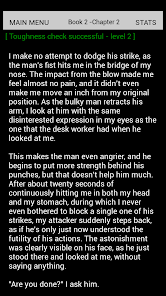 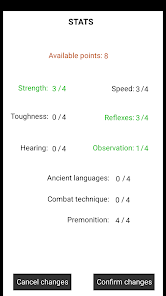 Disclaimer: The game is only available in English.

Magium is a DnD inspired text adventure game similar to old Choose your own story books (CYOA), in which you play as an ordinary guy named Barry, who joins a deadly mage tournament against the most powerful mages in the world in the hopes of using the prize to fulfill his lifelong dream of becoming a mage himself.

As in all interactive novels, your choices will affect the story, and making wrong choices can even lead to your death. Besides the traditional choice making of regular Choose your own path games, Magium also has stats that you can upgrade with points that you will receive occasionally, throughout the game. These stats will be checked by the game from time to time, to see if they are high enough to allow you to perform certain actions. For example, if your ancient languages stat is high enough, you can understand what animals and monsters are saying.

The story of Magium starts at the beginning of the tournament, right after you and all the other participants were transported to the continent where the contest was taking place, and it is set in a medieval fantasy setting, with a dash of futuristic looking magical devices, which are relics of an ancient, technologically advanced civilization that crumbled hundreds of years before the beginning of the series. The world in which the story takes place is somewhat inspired from Dungeons and Dragons, so if you've played DnD before, you will likely find some similarities, especially regarding the magic system.

As the story progresses, you will meet with other participants, you will make friends and enemies, and you will find out more about the continent you are on, and its inhabitants. You will find out that a person called "The Creator" had established several utopias in this place, six hundred years ago, where animals and humans lived in harmony, and food was created through magic. What you will get to see, however, is the downfall of these utopias, some of them being on the brink of destruction. Your choices will influence what happens in these cities, and you can even choose to save them if you so desire.

The game will be divided into six or seven books, each of them consisting of more than a hundred thousand words.

The first book is now available in its entirety, and it can be played for free. It is approximately 178k words long, which translates to about 700 book pages. This number also takes into account the story's branching paths. The length of a playthrough on average should be about 90k words, so about 350 book pages.

The second book is 277k words in total, on all paths, which translates to about 1100 book pages. On one path, you should be seeing around half of those words, so roughly 140k, which would translate to 550 book pages or so.

Credits for the game icon go to Agnes Landgraf.

A text-based adventure game, Magium lets you play as Barry, who goes and joins a fatal tournament against powerful mages with a dream to become a mage himself. The game has stats that can be upgraded with points you get occasionally in the game. The whole game is divided into different books and every book has hundreds and thousands of words. In this game, you will meet people, make enemies and friends, and find about the continents you’re on. The game is set in medieval fantasy settings and has a dash of modern and futuristic look.

In case you missed the previous update, chapter 11 of book 3 is currently available, however, it is not the final chapter of the book. Book 3 will have 12 chapters in total.

This new update fixes a bug that appeared in the stats menu if you restarted the book or the game from the latest chapter.
Safe to Download