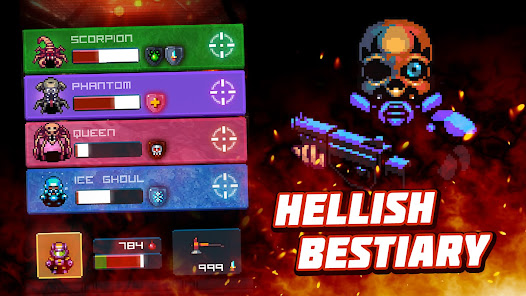 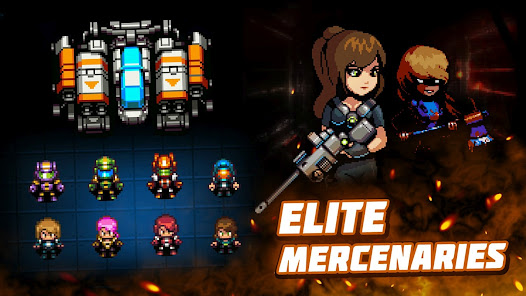 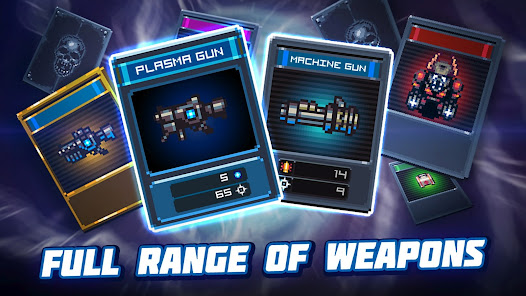 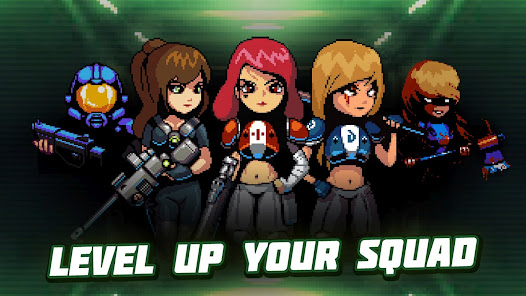 9 10 "If you enjoy dark sci-fi themes and like a challenging RPG with some roguelike elements, then look no further than Dead Shell.” / Christine Chan, appadvice.com

Dead Shell is an addictive pixel style RPG with roguelike elements and clicker games. Here, you have to shoot your way out of hordes of monsters, traveling through unique and randomly generated labyrinths, get loot and upgrade mercenaries and weapons.

Blaster-wielding mercenaries vs beasts from the labyrinth: who will win? You're commanding a die-hard assault squad. Destination: Plutonia, a settlement on a Doom-4 class planet. Shuttle cargo: a range of lethal weapons, from axes and chainsaws to blasters and BFGs. Anything might come in handy in Plutonia, the Federation's most remote colony.

Scientists, miners, guards – all sorts of civilian personnel worked there until recently. A week ago, the Center received a mayday signal from the settlement. Demonic roars and screams of terror filled the comm channel, and then it fell dead silent.

It's time to descend into the infernal abyss and show the demons who's the boss here. Fight your way through all the circles of hell to reach the very bottom. Look cosmic evil in the face and emerge victorious.

– Random level generation: everything from locations and monsters to loot is generated during the game. Every time a new dungeon!
– Infernal menagerie: hordes of alien diabolical creatures that are eager to kill you in a special sophisticated way. Get experience points for every creature you kill!
– Huge arsenal of weapons: from axes and chainsaws to blasters and BFGs. Change weapons during the battle, collect ammo and improve combat performance!
– Elite mercenaries: each has unique skills, prefers a certain type of weapon. Raise the rank of characters and create an invincible squad!
– Gameplay in the Roguelike genre and Pixel Art graphics, traditional components of the RPG genre, such as character upgrade and exploring the world around them, will never let you feel bored!

HeroCraft is a well-known developer with much-loved strategy games such as Majesty: The Northern Kingdom, Space Arena: Build & Fight for Android, Armor Age: Tank Wars, King of Dragon Pass, and Warhammer 40,000: Space Wolf. But this time this company released an amazing work with a completely different style: an arcade roguelike adventure with classic pixel graphics. And this is definitely a game for fans of the sci-fi world and the dark dungeon matrix world.

What does Dead Shell relate to Dead Cells?

Classic pixel graphics games will bring players unforgettable emotions, especially for 8x, 9x. If you are looking for a quick, entertaining game with role-playing and roguelike elements, Dead Shell is one of the notable names.

Dead Shell is, of course, not Dead Cells. They are of the same genre of roguelike role-playing with pixel graphics. Except for the rather familiar name, Dead Shell is not a copy of the famous Dead Cells. I even think that Dead Shell has a strong personality.

Dead Shell takes place in a sci-fi setting. You are a mercenary squad commander. The big task for the team this time is to rescue a land that is occupied by fearsome monsters.

A week before the event in the game, the Rescue Center of this elite soldier team received an emergency signal from the settlement where all scientists, miners, guards… work and live there. Devilish roars and horrifying screams echoed through the receiver, and then the signal was cut off. You knew right away that something bad had happened. Immediately, you formed an army and moved as quickly as possible to Plutonia, a settlement on a Doom-4 class planet.

You and your members will go deep into the dark dungeon matrix to fight the monsters and save the people they are holding. You will have to complete all levels to get to the final dungeon called Plutonia. Beat the final boss, and you will complete the game. But before coming here, you have to go through a lot of different levels. Like I said, each level is a new dungeon.

Dead Shell combines traditional role-playing with roguelike combat in dark dungeons. The enemies are all kinds of monsters with all possible forms: phantom, zombie, vampire, slime… Although it is also designed according to the increasing difficulty level like many other roguelike games, each level in Dead Shell is an absolutely different environment. Players must flexibly adapt and manage quickly in all situations to master the situation.

If you are not brave enough to overcome, you will fail somewhere in the dungeon and start over. This little bit of pressure has made the game more heart-pounding than normal dungeon genres. Each time you start over, even if you have more experience, the monsters rushing out in different random ways will make you panic just like the first time.

After each battle to win a monster, you will get extra points. Score a lot of points, and there will be enhancement items, even new weapons. In addition, during the battle, you will need to continuously upgrade your mercenary team with power items obtained each time winning a level. Strong skills and powerful weapons of the whole team when working together will create a solid battle, helping you to overcome all enemies and move quickly to where everyone is waiting.

The game is compact and interesting with a short but convincing plot that lets players know the necessary progress of this long adventure. The classic pixel art style is also one of the factors that make up Dead Shell’s hidden charm.

If you have the same taste in fighting science fiction roguelike, you are invited to download the game here to play.

... and Commander. The Federation has a secret scientific base on this planet. We received a strange signal from them, now we are trying to get more information. Details in the next updates.
Safe to Download