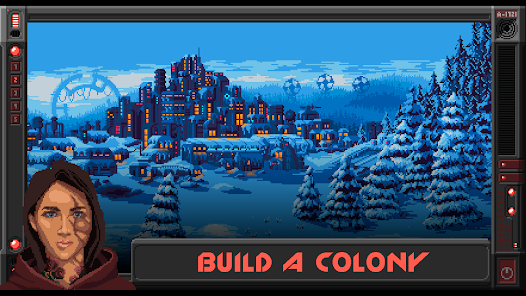 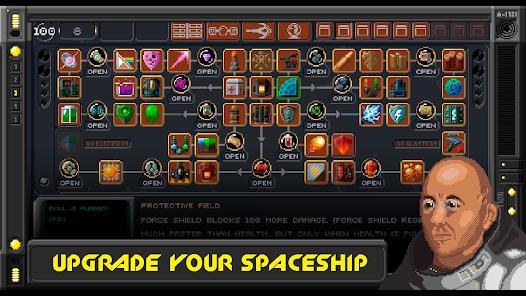 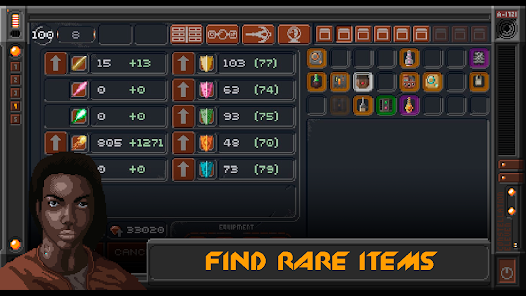 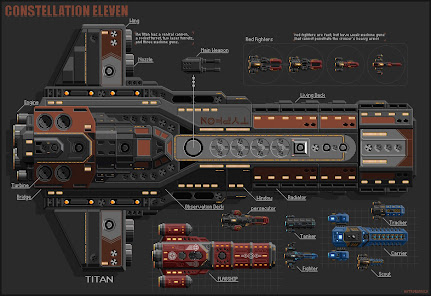 ▶ Space shooter
Control a spaceship in the open cosmos and fight many different opponents in a dynamic throwback to the top-down shooter genre with RPG elements!

▶ Old-school atmosphere
A new take on classic arcades once loved by millions where you will have to battle enemy squadrons in your own space destroyer. The game is done in a charming 16-bit aesthetic.

▶ Character progression mechanics
Create your own character and advance their skills, look for various components in space to unlock new abilities. Spend minerals on improving your ship, trading, building your own colony and much more.

▶ Multitude of items and customization
Find weapons and armor with randomized stats, create your own build, edit the way your character and ship look, set your own style and adhere to it.

Constellation Eleven is an arcade space shooter with RPG and sandbox elements, a variety of enemies and charming 16-bit graphics that will definitely keep you entertained. As you progress through the game, you will encounter more and more new challenges, encountering both small ships and enormous star cruisers, with dynamic difficulty that increases from constellation to constellation. Complete quests, build settlements, explore the endless cosmos. In this game, you can find recognizable RPG and Roguelike mechanics, stylish graphics inspired by pixel art and an atmospheric space ambient soundtrack. This project was inspired by RPG and Hack and Slash genres, as well as many space exploration games such as Reassembly, Starbound, Space Rangers and Stellaris.
Constellation Eleven is a completely free game with no ads.

Main changes:
– Many new quests have been added and the quest system has been improved. Quests now have set difficulties that affect the reputation and credits received. The difficulty also depends on how your level correlates to the level of a constellation: if you are in a low-level constellation while at a high level, the game will identify your quests as easy. In addition to the unique quests given by each fraction, you will now be offered two random quests to choose from, and once you reach a certain reputation threshold, fractions will reward you with reward crates that open without the need for an impulse charge.
– A new trading system has been added. 30 trader characters have been added to the world; they offer to trade one random type of item for another random type of item in the amount specified by you. Traders might even directly offer to trade minerals for credits or sell you information on where valuable equipment is located.
– New neutral space dwellers have been added: trash collectors.
– A new type of offense has been added to flagships – weapons that fire volleys at the player’s ship once they enter the attack zone. Those weapons are placed along the side of the cruiser or on either side of its main turret.

Other changes:
– New enemy flagships with new weapons added.
– Many sound effects improved. Some sounds now quieter the further the source is.
– Layers between the background and the ship that consisted of stars and dots look more realistic now and consist of asteroids.
– Space debris now contrast more.
– Camera placed slightly further away and gets even further based on movement. (from +15% to initial value)
– Parts of UI redrawn.
– Flagships controlled by the player now turn more smoothly.
– Certain fighters redrawn.
– Bug fixes.

Are you ready to experience endless space and unpredictable battles?

An arcade game but in a very different version

Constellation Eleven will give you a different perspective on arcade games. It is not simple and easy and does not offer so many things available on the adventure to get like other arcade games. In this game, you play as a space warrior. You control an epic warship and fight tenaciously against every wave of alien attacks.

These battles all take place in space. The enemy is not just one, but many different species in countless advanced battleships. For each victory, you get many valuable items to upgrade weapons and stronger spaceships to open more winning opportunities in the future. Most operations are based on a one-touch mechanism, which is also the basic feature of every classic arcade game.

The difficulty levels will increase gradually over time. The difficulty is shown through the increase in the space enemies’ speed and ability, the number, and modernity of their warships. In return, the game provides players with a huge arsenal of weapons, a series of modules. So, you can upgrade and customize and enhance the war stats of the warships.

I bet all of you may have played a mobile game with the space theme. But you must still feel unsatisfied with almost all of those games. Freedom and space in those games are sometimes still limited to a certain extent. But Constellation Eleven is different. I was really surprised when the game opened up a truly endless space. It is where you experience a top-down perspective, and are free to go everywhere to shoot and fight.

Your mission is not only to fight with spaceships but also to collect resources and complete assigned tasks.

That freedom manifests itself in many different stages. You are free to choose the main character. Each has its abilities and personality. You can customize the appearance a bit after you’ve selected the character.

The warship is also your choice. At first, it can be just some basic samples. Then after victories, you will accumulate different parts to upgrade your ship; or better, you can quickly unlock a series of new, modern, and powerful warships.

You are also free to choose one of two approaches when you die: Continue playing after death or starting over from the beginning.

Freedom also appears when you face the enemy. Except for the boss of each scene, you can choose whether to fight the airships on the way or not. If yes, you can collect bonuses. Otherwise, ignore it if it is unnecessary or if the situation is very unfavorable for you.

The gameplay is quite simple. You can enter the game easily. The left side of the screen is to control the movement of the aircraft, the right side is a screen capture function for those who like to take selfies while playing games.

It sounds simple. But to go deep depends on the items, tools, and enemies you’ll encounter. Along the way, you will encounter space stations where you get to refuel, buy new equipment, and rest before the new battle begins.

Along the way, there is also the opportunity to collect more lives, health-boosting items and increase recovery for better defense and survival. Each battle is on a star. The game has many shimmering constellations. In each constellation, in addition to the main task assigned at the beginning of each scene (such as transferring an important item, destroying all the enemy warships…), you also have large and small arenas. Each arena has different waves of enemies and prizes. You will be rewarded when you win, but lose nothing when you lose, and it will not affect the number of lives the character has in other game modes.

Constellation Eleven uses pixel-style graphics, a rarity in space combat-themed games. But for me, this is the strange charm of this game. Because it’s reminiscent of old retro games on old consoles. The feeling of combat also becomes better when you don’t have too many things to distract you. Just focus on fighting.

That is simple but not superficial. The details from the spaceship’s structure, the modules, the weapons to the military base are rich in description. Pixel is still extremely detailed here.

The sound is not too special, it’s just enough and fulfills its role. The background music creates a deep cosmic atmosphere. And all the sound effects when fighting and building bring enough excitement to the player.

This space-themed shooter will make you feel like you’re part of the sky. And each passing war will leave many imprints in terms of space, enemy, and your skills. If you like space combat, you must play this game right now!