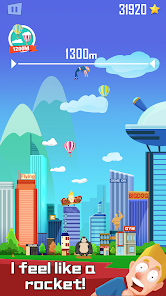 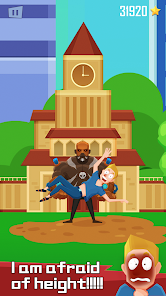 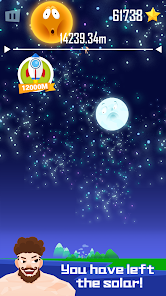 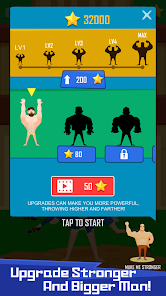 Buddy Toss is super fun and makes me laugh every time!

Tap to toss the man in his arms into the air and tap on it again before he falls to the ground.
Repeat, Until he was toss on the Galaxy.
Ha, I am laughing out loud!

Buddy Toss is Suit for all age and completely FREE to play!
Now play and become the strongest man in world!

An extremely funny and interesting game of the publisher CurryGames. Currently, games using physical rules are increasingly popular. Angry Birds is a clear proof of this. Today's game we introduce to you also has a very special mechanism. If you feel bored with high-quality graphics games like PUBG Mobile, you can change your feeling with this funny game.

It can be said that Buddy Toss's playstyle encapsulated in two words "timely touch". After the first touch, your character is toss into the air by a muscular dog or some wrestler that I haven't found yet. When you fall down, continue to touch the screen so the muscular dog continues to throw you into the air. Keep repeating like this, the next throw will be higher than the previous throw, and you will also get more points.

It sounds silly, but this is the game my father used to make when I was a small child. Of course, I can't fly as high as in the game. But in fact, we had a very happy time. Have you ever been like that?

Buddy Toss defeats all the laws of physics that we know or don't know. Not only flying high, but you can also fly as high as a 30-story building and even fly out into space, surpassing the law of universal gravitation. Explore the solar system, galaxies, cosmic black holes, stars, search for Jedi, … without needing a spaceship. All it takes is a muscular man with a strange hobby to throw others into the air. But be careful! Just an incorrect touch, the main character of the game will fall straight to the ground from a distance of 10 million light-years.

The only upgrade mechanism you can perform in Buddy Toss is character upgrading. After upgrading, your character can fly higher after each throw. How to do that? After each game, the game will reward you with a number of stars. Use this star number to upgrade your character in the Store.

In terms of graphics, Buddy Toss is designed in a quite funny cartoon style, bright colors. The way they simulate everything can make you laugh. As you fly up into space, you can feel like the way Ant-Man is in the quantum world, where there are lots of abstract images and colors. Besides, the characters' screams when he falls are so funny.

Unlimited Stars: Besides the goal of conquering new heights, many players want to own beautiful skins. However, the cost of buying skins is relatively expensive. Want more stars, you have to play a lot and watch lots of ads. To save time, you can consider downloading Buddy Toss MOD APK. The game gives you a lot of stars right after starting the game. If you want to download the MOD version, you need to uninstall the version from Google Play before.

VIP Unlocked: You are no longer bothered by ads. If you have used up the stars of the MOD version, watch an ads video to get stars immediately.

In general, Buddy Toss MOD APK is a fun, simple and absolutely free game. Without the violence element, everything is simulated in a humorous way, so the game is suitable for everyone, including children. If you are afraid of heights, maybe the game will cause a little fear!